History and Past Presidents

History of the NEWSS

In early 1947, the Director of the Cornell Experiment Station issued and open invitation to all interested parties to participate in a workshop on weed problems and to explore the feasibility of forming an organization of weed workers in the northeast. They convened on the Cornell campus on February 18-19, 1947. Robert D. Sweet of Cornell was the organizer and acting chairperson of the meeting. In attendance, there were 47 participants from colleges, experiment stations, and federal, while 37 were from industry representing 22 companies. State experiment stations represented at the first meeting included: Main, New Hampshire, New York, Massachusetts, Rhode Island, Michigan, Ohio, Pennsylvania, New Jersey and Virginia. The Northeastern Weed Control Conference formally formed on February 19, 1947. The second meeting was held in New York City, January 12-13, 1948 where meetings continued each year until 1973, when the meeting began to rotate to different Northeastern cities. The name was changed to the Northeastern Weed Science Society in 1970. The membership reached a high of over 750 members in the mid-1960s and slowly dropped to about 200 in the mid-1990s, where it is today. The conference supported the weed field days, starting in the mid-1950’s and the first student weed contest “Weed meet” that was held in August of 1983 at the Wye Institute on Maryland’s Eastern Shore.

History and Past Presidents

History of the NEWSS Gavel

On the Rutgers University campus stood a majestic oak which was named the Kilmer Oak. It is said this oak tree inspired the New Brunswick poet-soldier Joyce Kilmer to write his famous poem “Trees”. The tree died of old age, said to be over 100 years, and was cut down in 1963. Many gavels were made from the oak of this tree, including the NEWSS gavel. 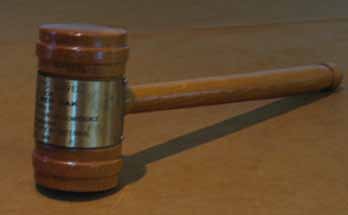 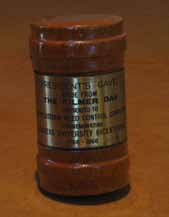 I THINK that I shall never see
A poem lovely as a tree.
A tree whose hungry mouth is prest
Against the earth’s sweet flowing breast;
A tree that looks at God all day,
And lifts her leafy arms to pray;
A tree that may in Summer wear
A nest of robins in her hair;
Upon whose bosom snow has lain;
Who intimately lives with rain.
Poems are made by fools like me,
But only God can make a tree.